Elvira Mistress of the Dark

It's a scream when you spin the Elvira Mistress of the Dark game reels. This creepy, campy, all-for-fun theme features every late night B movie fan's favorite film buff, Elvira, at her bold and brazen best. Offered as a nickel machine in a 75-coin, 15-line format, Elvira's unique personality shines through in special graphics, animations and multi-layered bonuses. Plus, max bet players earn a chance at a minimum $100,000 MegaJackpots Instant Winners progressive prize. 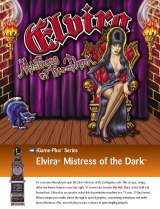