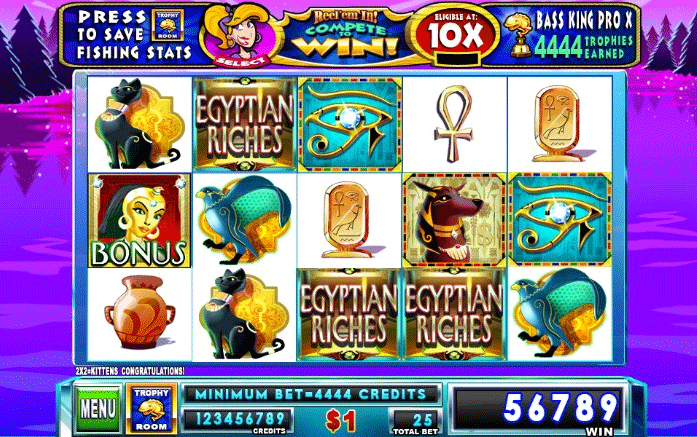 Compete to Win Eligibility Meter: As players wager, they earn eligibility towards the mystery-triggered community bonuses. The rate and speed of the play determines their Compete to Win! Multiplier. When play stops, players remain eligible for community bonuses until their meter ticks down. A player will miss out on a bonus if they are ineligible when it triggers.

There are three possible bonus events that trigger randomly on the bank.

1) Fishing Contest: Each fisherman has a hook in the water baited with a worm. The contest starts with each fisherman reeling in multiple fish. After each fisherman catches 3-6 fish, all of the fish clear out. A medium or large fish appears from the depths and goes to one player hook, generating anticipation. After this final fish, each fisherman wins the credits accrued during the contest. The first-place finisher has the value of all the fishermen’s wins added to their total bonus win.

2) Fishing Race: Each player is shown in their boat on the left side of the screen in perspective view. Suddenly they all get a fish on their lines, beginning the race. When the first fisherman makes it all the way to their fish, they reel it in and get the award for the fish. All of the other boats now stop and reel in smaller fish based on their finish position of 2nd, 3rd and 4th. During the first half of the race, exactly one 2x coin will run into one of the boats. When this happens a Double Bonus banner will appear behind that boat for the duration of the race. Whatever value that fisherman wins for the bonus will then be doubled.

3) Best Fish: The bonus starts with each of the four hooks rising up and down in the water. When the hooks stop bobbing, the nearest fish takes the bait awarding that fish value. After a player catches a small fish or medium fish, it struggles down to the depths where the big fish are. There it has a chance of getting eaten by the large fish. In this case, while pulling up the large fish, it may fall off leaving behind only the bones of the small fish. When small fish are eaten by bigger fish, the player only wins the value of the larger fish. If the player reels in only the bones, it is worth the same as the smaller fish from which it started.