Electro-mechanical arcade game. The 25-cent game features 10 animated ducks flying on a screen from left to right which disappear when shot with the attached shotgun controller. The player receives ten shots, and the shot ducks are framed in a duck hunting score. Shooting the shot gun and hitting a duck produces a sound effect. The game dispenses a perforated computer card-style ticket showing shooting accuracy and score when game is finished which could be used for prizes or as a permanent record of the player's score. Additionally, the game could be set to give a free game for a perfect score. 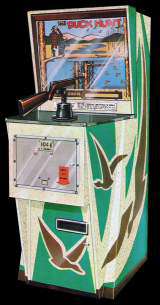