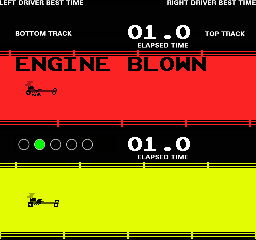 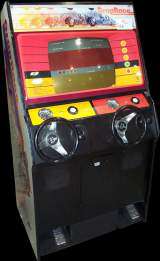 Drag Race was a monochrome game. Colors were introduced through colored overlays on the bezel.

After a nearly 50-year run, the mid-1970s video games like Drag Race spelled the end of the electro-mechanical arcade games (such as "Killer Shark" seen in the movie Jaws). Video games would spawn a nation-wide phenomenon which has gone on to this day.

Drag Race was one of many mid-1970's Atari games such as "Night Driver", "Starship 1" and "Sprint 2" which were often found at carnivals and bowling alleys. Kids would flock to these establishments just to get an opportunity to play the games rather than the primary source of entertainment they offered. When the 80's arrived, video games could be found everywhere including grocery stores and kids didn't have to go very far to play their favorite game.

Designed and programmed by : Mike Albaugh