As Tron, you fling discs at Sark in an attempt to knock him off his platform. Knocking off Sark will advance you to the next level. Other levels vary the level and number of platforms to jump between. 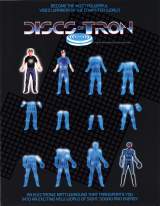