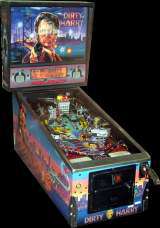 When having the 'Body Armor', drain the ball during 'Meet the mob'. When the ball is launched back all the mobsters will have cowheads.

Version L-2
Date : January 31, 1995
- Warehouse popper now kicks faster in multiball to prevent 3 balls from getting stuck in it.
- Fixed a display problem where the incorrect award value was displayed in the warehouse raid feature.
- Added a sound to slam tilt.

Start a game just before midnight to enable 'Midnight Multiball'.