Dinospin offers very fast and interesting play and many different strategies for
maximizing points won.
1) Insert coin(s) to ready the game for play.
2) Push the START button to begin the bone spinning.
3) There are several seconds in which to influence where the bone will stop by skillfully pushing the Stop and Super Fast Skill Stop buttons.
4) Points are awarded and displayed in addition to any accumulated points already won.
5) Depending upon the number of points won, the option to go for two and spin again may be given. If the go for two option is declined, points may be traded for tickets or additional coins may be inserted to play again.
6) When going for two, Dino is selected and the bone spun again.
If the bone lands on the chosen color, the points are doubled. Otherwise the points risked are lost.
This process of choosing whether or not to go for two is continued until one of three events occur : (1) Volcano is incorrectly chosen and the points risked are lost; (2) the maximum number of times allowed to go for two is reached and points won is added to the accumulated points; or, (3) the option to go for two is declined by the player and the points won so far are added to the accumulated points.
7) The total accumulated points may be traded for credits or tickets.
Sound effects play throughout game play apprising player of go for two options
and acknowledging wins and loses. 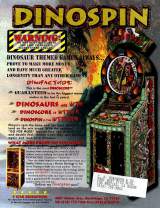