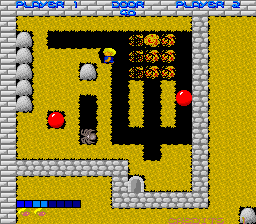 An arcade puzzle game in which a single player must tunnel their way through a number of underground caves, collecting the many gems spread throughout the levels. Each cave is littered with rocks which, should they fall onto the player, will result in a loss of life. Carefully planned tunnels can be dug to manipulate the direction in which the rocks fall, however, which makes them an effective weapon against the many enemies that populate the levels. A number of red explosives can be found which can also be used to kill enemies and also to destroy any walls blocking the player's path. Again, like the rocks, these must be used carefully to prevent the explosion from killing the player.

In order to complete a level, a specified number of gems must be collected. Once a sufficient amount of gems have been collected, an exit will open which the player must enter to proceed to the next cave.