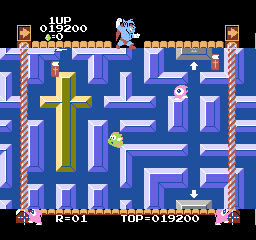 Devil World is a maze game developed and published by Nintendo. The player takes control of a little green dragon called 'Tamagon' who is on a remarkable journey into the Demon World (his name is a pun that could be translated as "Egg-Dragon"). But things are always not so simple and our hero is the target of the Devil himself (who unsurprisingly runs the Devil World) and his demonic cohorts. Interestingly, Tamagon starts each round inside an egg - in this form, he is invulnerable to enemy attacks and he must hatch from it in order to take on his mission. Each round is broken up into three phases. The object of the first one is to collect all the pellets (called Bowa-Bowa dots) scattered around the maze, in a way very similar to Pacman. However, Tamagon must first find a cross in order to collect the pullets, and the cross also allows him to breath fire at his enemies (he however can only shoot one fireball at the time). Enemies hit by Tamagon's fire turns into Fried Eggs that the green dragon can gobble up for points. Once all the pullets have been collected, the game moves to a different phase where the player has to pick up four Bibles and seal them into a special red stone localized at the center of the maze. Bibles give Tamagon the same abilities than the crosses, however, unlike them, their magic powers don't wear out. But Devil World has another unique twist - Tamagon doesn't control where the screen scrolls, instead Devil (symbolized by a blue winged character at the top of the screen) automatically steers the player in one direction or another, thus creating situation where Tamagon can easily become trapped or crushed by the screen's boundaries. Finally, each round is followed by a short bonus stage where Tamagon controls the direction in which the screen scrolls (by stepping on special tiles in the maze) in order to collect as many bonus items as possible within a time limit. A two simultaneous player mode is available and features a second red Tamagon.