Destiny of an Emperor 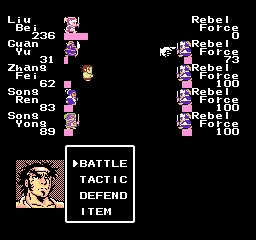 In the era known as the Later Han, the people of China were plagued by a bandit horde called the Yellow Scarves. They searched for a hero that could amass a force strong enough to conquer these cutthroats and thieves.

At that time, three men were separately gaining power by attaining the service of many Warlords. They each planned on ridding their country of the Yellow Scarves, but when that task is finished there will only be room for one Emperor.

* Return to a time of sword and honor, where an oath was signed in blood.
* Master the strategies in this role-playing game for the NES.