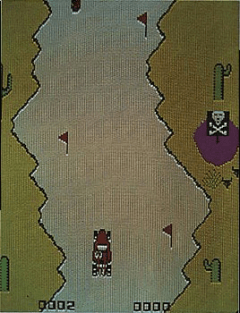 Desert Race was the second in the series of Moppet Video games. The 'Moppet Video' games had small cabinets about four feet high, and were designed specially for young children from about 5-8 years old.

Desert Race was basically a re-skinning of the original Moppet Video game, Tugboat. Many similarities are evident including the 'river' is now the 'road', the Tugboat is now the 'race car'. There was a relatively small amount of programming involved to handle the differences between Tugboat and Desert Race that involved more than new graphics and sounds.