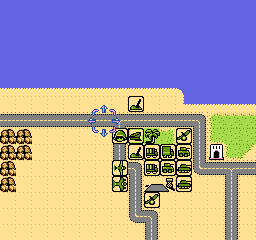 Desert Commander is a unique war simulation game, for one or two players, that creates realistic battlefield situations where your greatest weapons are intelligence and courage.

Military hardware, troop strength and deployment options are completely variable at any of five levels of battle complexity and conditions. Yet with your forces evenly matched against those of your enemy, all planning, calculations and actions must be carefully considered to dominate today's contest.

Your strategies should be brilliant; your tactics, flawless. Victory can be won only when you outwit your opponent - then conquer his armies or capture his headquarters. The enemy has been sighted. Your challenge has been accepted. The future of the free world now awaits your brave and steady command!