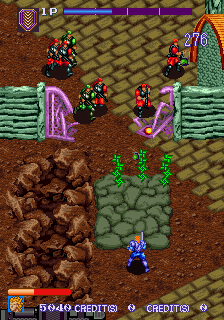 Select one of 3 available characters in this vertically-scrolling, futuristic, military-themed shoot'em up. A variety of power-ups can be picked up along the way to aid the player in his or her battle against the many hundreds of troops and tanks that populate the levels.

Runs on the Sega "System 18" hardware.

Desert Breakers is Sega's attempt to cash-in on the success of Capcom's "Mercs". The Sega game looks and indeed plays almost exactly like Capcom's 1990 classic - itself a sequel to the legendary "Commando", released in 1985.

This game is hard to find because Sega produced only a few boards because the game was based on the Iraqi war, and particulary focused on Japanese's military interventions. According to the Japanese constitution, the Japan can't build army or do any military intervention. This video game can be considered as a sort of opposition to the Japanese politicians.
SOURCES
Game's ROMs.
Game's screenshots.