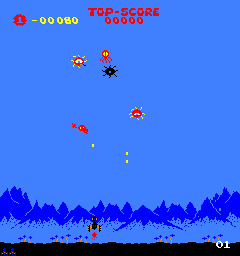 * Hint 1 - The Small Demons Change Their Shapes Three Times : The first demon shape (Demoneye-jr : 40 pts) turns into the second (Octoplus : 70 pts) and the second into the third (Octobomb : 100 pts) when they are shot. Care must be taken to prevent Octobomb ramming into the spaceship.

* Hint 2 - Bonus Chance for 3-Demon Formation : Sometimes Demoneye-jr and Octoplus change their color. If Octoplus are shot while their color is changing they will turn into a group of three Octobombs. If all these three demons are killed a bonus point is scored.

* Hint 4 - 3-Eyes Demon King Appears : If the player succeeds in a series of two games, a three-eyed demon king appears (Demoneye-King : 1500 pts). To destroy it, the player must hit its heart 3 times with his missiles.
SOURCES
Game's ROM.