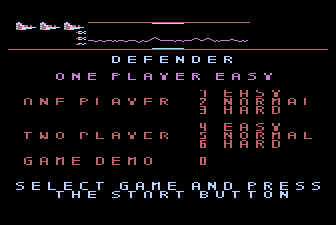 As Captain of the Spaceship Defender, your mission is to destroy the alien force and save the Humanoids. Your speed and skill have earned you this heroic mission. When Humanoids are abducted, you'll have to destroy the Lander and catch the falling Humanoid before safely returning him to the city below.

* One of the most important strategies to remember is to keep moving and firing at the same time. Your continuous fire will build a 'wall of fire' to protect your spaceship.

* Fly low. Most good DEFENDER players seldom fly more than two inches above the cities. This helps in protecting the Humanoids.

* Destroy the Landers, but don't shoot your Humanoids.

* Listen to the game sounds. When you hear a Humanoid's cry for help, immediately go to the rescue.

* Learn to use the scanner. Try playing DEFENDER using only the scanner. When you learn to rely on it, it will help you improve your score.

* Reversing direction suddenly is good strategy. It confuses and stops aliens. By the time the alien recovers, you can reverse directions again, and blast the alien.