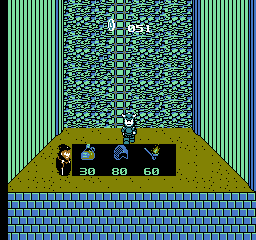 You are young Prince Myer, setting out to defend the ancient kingdom of Willner. Rubas, King of Devils, has built a castle in the north and is preparing to invade your kingdom.

Ringing magic bells, he is calling out an army of the most terrifying creatures known (or unknown) to man. To defeat Rubas, you must journey to his palace and burn down his seven bell towers. On your quest, you will collect weapons and armor to defend yourself against rats and crawlers; bats, snakes and slime; demons, dragons and more. You'll need every ounce of help you can get. For you are all that stands between your people and the forces of darkness.

Released in September 1987 in the USA.