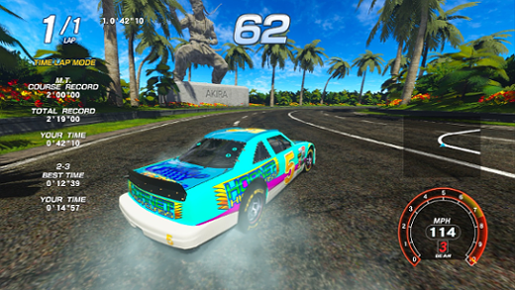 Daytona is back! DAYTONA USA is the holy grail of arcade racing - First launched in 1994, this brand new entry brings Sega’s #1 racer screeching into the 21st century! DAYTONA® Championship USA features three brand new tracks including a recreation of the newly renovated DAYTONA International Speedway®! In addition, the original three classic courses have been remastered for drivers to enjoy in the modern era. The six tracks are also joined by a plethora of game options that operators can set to custom tailor the game to their venue.

While the original Daytona USA is still popular in many venues across the world, the years have taken their toll on the hardware, with parts becoming difficult to find. This was Sega's answer to the demand from arcades to offer Daytona while resolving this problem.

When a cabinet is not linked up to any other cabinets or if no other players join the lobby, if the player inserts credit and presses the Start button, they will be taken straight to a Single Player game where they are given the option between QUICK RACE, CHAMPIONSHIP and TOURNAMENT (If enabled in the game settings of the test & service menu).

Released in two models - first as the Deluxe which featured a 47in. HD screen and a second 27in. screen for the marquee; the standard model dumped the 2nd marquee and diminished the screen size, while maintaining the camera and software. Initial deluxe units shipped with an Up/Down shifter (but the software recognized 4 settings), which was later replaced with a proper 4-speed shifter; all standard units use the 4-speed control.