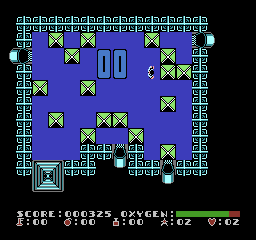 You're Dash Galaxy, Inter-planetary super hero. You've fought your way out of tight spots a hundred times, in a dozen solar systems. But you haven't seen tight till you accidentally land in the mental ward of the universe. The Alien Asylum. You must make your way through the mysterious and deadly levels of the Alien Asylum and destroy its Overlords in the Control Complex. Your weapons? Your wits. And a supply of bombs, detonators, and life-support modules. You'll need them all to penetrate deadly force fields. Move "Mind Blocks" into key positions to advance. And greet a gruesome variety of space-age lunatics who want you to stay. Wild graphics. Insane action. Dash Galaxy in the Alien Asylum might just drive you crazy!

Released in February 1990 in the USA.
SOURCES
Game's ROM.