Darius Plus is a horizontal shooter and is the conversion of the arcade game Darius originally released by Taito in 1986. Massive and aquatic looking mechanical entities are heading towards planet Darius, and they are clear warning signs of an imminent attack. A courageous pilot, Proco Jr., on-board his Silver Hawk space fighter, is given the perilous mission of stopping the upcoming war.

The ship is equipped with two attack weapons - a forward facing laser and ground bombs. A third feature is a powerful force field shield that the player can activate to protect a small perimeter around the ship. As aforementioned, although the game only features two weapons and one shield option, they can be incrementally upgraded by collecting orbs left behind by colored enemy ships:
- Red orbs upgrade the main weapon (from Missiles to Lasers and Waves)
- Green orbs upgrade the bombs (from Simple to Twin and Multi)
- Blue Orbs upgrade the shield (Arm, Super and Hyper).

Additionally, other orbs are available for the picking - some destroy all enemies on screen whereas others award the player with Extra Lives or Points. But the upgrade system in Darius is unlike any others - although each collected orb gradually enhances a weapon, a total of eight much be stored to finally upgrade it to the next level (and losing a life takes the ship back to the lowest level). Finally, Darius features an unique branching level progression in which the player can choose an alternate path to take at the end of each stage. Although only seven levels can be accessed in one single play, the whole game boasts a total of twenty six different stages. Unlike the original arcade game, Darius Plus is single player only. 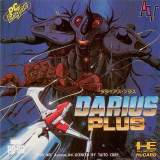