The direct sequel to the 1986 original, Darius II retained the distinctive 3-screen format of the first game.

The power-up system of Darius II was changed from that of its parent game, with players having to destroy complete waves of a particular enemy to earn a power-up. 2 new power-ups were also added; the 1st was a new weapon power-up that gave the player green, vertical lasers, the 2nd power-up was a rainbow-colored item that powered up all of the players weapons.

Another new feature of Darius II is the appearance of mini-bosses - large enemies that appear at the mid point of a level, possessing similar strength and abilities to those of the game's normal bosses (such as extravagant weapons, or the inability to be damaged without first exposing a vulnerable area). The mini-bosses in Darius II are in fact smaller versions of the bosses from Darius.

The game is set in the inner regions of the Solar system, and has the same branching level structure as Darius, allowing players to select their own route through the game. 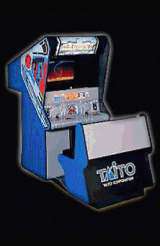 Darius II was released in September 1989.

This game is known in US as "Sagaia" (licensed to Romstar for distribution).