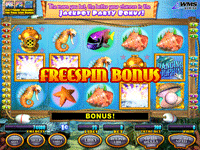 Bonus are triggered when the 'Dancing Dolphins' symbols appear on reels one and five. The player is prompted to select one of the three shells. Depending on which shell is selected, the player will be awarded 5, 10 or 15 free spins. When the free spins begin, the Dolphin symbol becomes 'wild'. This bonus can be re-triggered in the free spin round and will result in an additional ten free spins.

The JACKPOT PARTY bonus is triggered with the 'Jackpot Party' symbol on the fifth reel. The player transitions to all familiar Party Round where thirty presents, all multi-colored, reside in the center of the screen. At the top of the screen is a bonus meter that has openings to be filled by four starts. Each star represents a specific progressive jackpot award. The player searches for STARS in each round to be awarded each level's progressive award. Players are rewarded credits with each pick. The bonus round ends when the players select a 'collect' present.
SOURCES
WMS Trademarks list