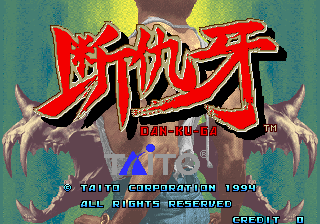 A one on one fighting game.

Made on December 13, 1994 but never released to the public. Dan-Ku-Ga is an updated prototype version of "Kaiser Knuckle".

Here are the known differences:
* Before your game, you choose the difficulty level Normal, Professional, or Training.
* At the character selection screen : Kazuya, Lihua and Liza have been redesigned, all others have different costume colors.
* Gonzales and Azteca are playable.
* The 5th opponent is Gonzales, the 9th opponent is Azteca and the 10th opponent is your Doppelganger.
* The CPU AI has been altered somewhat.
* You can backdash with all characters.
* You can't select the first opponent in 1P vs. CPU mode, except training.
* A medic comes out to check on the defeated opponent after the final round.