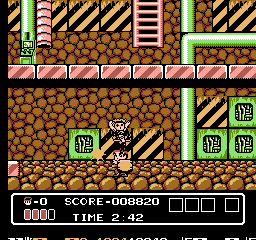 Daiku no Gen-san for Famicom was released on November 15, 1991 in Japan.

This game was not really a port of the original arcade game; it was an entirely new game released on the Famicom. The first level started off the same, but once you reached the first boss it was an entirely different game. In addition to replacing most of the levels from the 1990 arcade game, this 1991 Famicom game also included mini games between rounds.