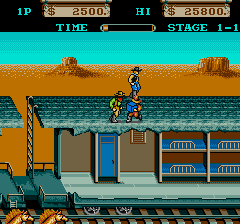 A side-scrolling platform run 'n' gun game set in the Wild West in which the player takes on the role of a train-robber. The cowboy can use either his fists, pistols or a whip and must work his way along a moving train, killing enemy cowboys and collecting money bags.

The action takes place either inside a moving train or on its rooftop, with ladders allowing players to move between the two. Player and enemy movement is on three planes and players can duck to both avoid enemy fire and shoot crouching enemies.

The weapon option the player chooses at the start of the games significantly alters the way it plays, with weapons arranged by ease of use. The three weapons and their qualities are:

* The whip has good range and can knock out several enemies at once, making it the ideal beginner's pick.

* The pistol fires bullets that have longer reach and is the only weapon that can be used while still running, but each bullet can kill only a single enemy.

* Fists have the shortest range but can lay out several enemies in one punch with a domino effect. Double points are awarded for each hit.

In addition to the main weapons, sub-weapons can be collected by killing special, box-carrying enemies. Lanterns create a wave of fire which burns enemies to cinders, bombs destroy everything within a ten-foot radius and lassos tie up enemy varmints.