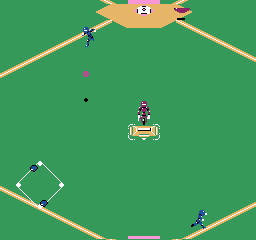 $23.4 billion a year for a .250 hitter? Baseball salaries in the 24th Century have rocketed through the O-zone! And team owners are rebelling. They've replaced these greedy players with mighty robots programmed for punishment. The result is Base Wars - a bizarre cross between baseball and gladiatorial combat. It's heroes are an awesome array of mutant machines. Metallic monsters resembling man, half-ton tanks and unidentified fielding objects. But forget about good sportsmanship in the Cyber League. Because in Base Wars, winning isn't everything, it's the only thing. And these mega horsepower sultans of swat are armed to the circuits with enough laser swords, guns and ammunition to spark an interplanetary war. All the elements of baseball are here - pitching, hitting, fielding and base running. Plus a brutal bonus: one-on-one battle royales for base possession.