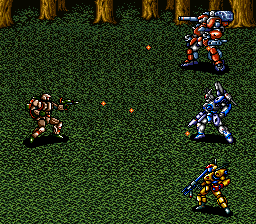 Cyber Knight 2 is a futuristic role playing game by Tonkin House, sequel of Cyber Knight released for the Super Famicon and PC-Engine systems. The story takes off where the first episode left it. Four years after the first game, the crew on board the Swordfish spaceship finally reaches the Earth, their final destination. But things have dramatically changed there and the prosperous planet they left is now in ruin. The Earth Federation is in control and they soon capture the crew and the Swordfish. The federation is at war and the general of a powerful military organization plans to take over the galaxy. The game starts on GL4420 and the player's first task is to find Doctor Dennet and retrieve the Swordfish before it gets transferred to another solar system by the Federation. The game closely follows the gameplay from the original game with obvious enhancements in both functionality and appearance. Once again, the player and his crew can travel through the Galaxy at light speed and visit various alien worlds. Each crew member can control a mechanized robot suit which can be upgraded using neo-part collected along the way. The fighting system was also greatly improved with detailed sprites and an auto-combat mode.