Cyber Core is a vertical shooter developed by Alpha System and published by IGS. In the year A.D 2269, the Earth is overrun by unknown and fierce insect-looking invaders. In a last ditch effort, humanity sends an alien ship called the Chimera and its pilot Mellange Kato (aka Rad Ralph) to counter the inevitable invasion. The player takes control of the insectoid combat aircraft and fights waves of odd-looking enemies such as bugs, beetles, slugs, giant flies and other hard to describe creatures. In a way similar to the classic Xevious, the ship combines two kinds of weaponry: air-to-air weapons against air-based enemies and air-to-ground bombs used against ground-based units. Additionally, large flying bugs occasionally appear and release transparent and colored pods when hit - they upgrade the ship's active weapon to Ring Lasers (red), Spread Gun (blue), Wave lasers (green) or Laser Beams (yellow). However, more than upgrading the ship's main weapon, these pods also literally morph the craft into a larger entity with a larger hit-box. Finally, a built-in shield allows the Chimera to take up to three hits before it goes to oblivion (the ship however loses a weapon level each time it absorbs damage). Cyber Core consists of eight long levels, from desolate cities and forests, all the way through to the heart of enemy territory. 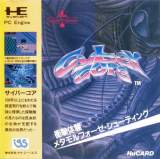