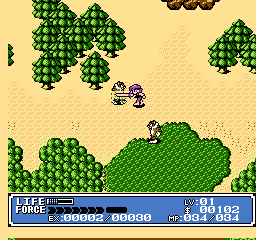 When the Great War engulfed the world, bringing civilization as we know it to an end, it ushered in a new era of sorcery and magic. The magicians used their magic to keep order, and peace reigned for a hundred years... Until an evil magician named Draygon, seeking to control and dominate his fellow men, began to use his powers for destruction and conquest.

To combat Draygon's evil, the other magicians constructed four powerful swords of wind, fire, water and thunder. Used together, the swords would transform into the mightiest weapon ever created: the sword Crystalis. But Draygon seized the weapons and scattered them far and wide throughout the land.

Only one hope remained: A young lad, himself a great magician, who had been imprisoned in a cave and frozen during the Great War. Though they knew it might destroy them, the wise magicians pooled all of their powers in an attempt to revive him. When the boy awoke - his mind a blank, even his name forgotten - they had vanished, leaving him to find his destiny in this strange new world.

In CRYSTALIS, you play the role of the young magician, making your way through Draygon's hostile land in an effort to locate the weapons you will need to defeat him. Draygon's monsters and black magic will threaten you at every turn, but you must not falter - only you can deliver the world from his scourge of evil!