The Crystal Mines once brought riches and prominence to the surrounding towns. Then the miners went too deep--into the lair of dangerous demons who live deep within the earth. These deadly monsters made mining impossible. Worse yet, they began to leave the mines and terrorize the community. The mines were closed and the community deteriorated.

That was years ago. Now, a local scientist has developed a robot capable of destroying the demons once and for all. Shortly before his mysterious disappearance, he showed you how his creation works. Now it is up to you to use his Lynx Robot Controller to lead the robot through the mines, destroying the demons and recovering the precious crystals. For your reward, you can keep everything the robot picks up. Also, you will have saved the community.

The object of Crystal Mines II is to move through each level, picking up crystals as you go. To successfully complete a level, the robot must pick up crystals with a value at or above the number shown at the bottom right of the screen. And he must do it within the time limit shown at the upper right.

To successfully complete this goal, you must dig through dirt and destroy rocks that block your way. But this robot does not settle for a wimpy little shovel. He blasts everything with powerful energy bursts. If the dirt is hard, the robot must keep blasting until it isblown away. Hard dirt is very dark, while soft dirt is light.

Of course, these energy bursts also come in handy when demons lurk about! To fire an energy burst, press A.

Scattered throughout some of the mines are packets of TNT. The robot can use TNT to blast certain rocks and demons that are too hard for energy bursts. Press B to drop TNT, then get away fast!

The robot can push boulders, crystals, and certain rocks. This is handy for blocking a demon's path. This also comes in handy for destroying certain demons. Push a boulder so it will drop on a demon's head and the demon will be cn~shed before it knows what hit him.

Be extra careful around boulders. They can do serious damage to the robot, too. Also, boulders are not always what they seem. Sometimes dormant demons look just like boulders. Push or fire energy at a dormant demon and the demon will wake up very angry!

Pay attention to gravity. Crystals, boulders, and heavy rocks will fall if left unsupported. Some mines contain gravity switches which actually change the direction of gravity. Be careful around these switches. (A gravity indicator is in the lower-left corner of the screen.)

Yes, the Crystal Mines are dangerous. But they can also be very rewarding. They are packed with precious crystals. These crystals were the life blood of the surrounding communities before the demons moved in. Now the robot must collect the crystals.

When you meet your crystal quota in a mine, you will hear a musical cue. When you hear this cue, look for an exit circle. When you find the exit circle, step into it. You will immediately leave the mine and collect your reward.

There are special tools hidden in the mines that you may need to complete the current level. Also hidden are bags of precious metals. Pick up as much copper, silver and gold as possible. Metals are worth thousands of points at the end of each level (Screen 8).

There are 150 different mine levels, plus 31 bonus levels. You will discover many objects and encounter mind-boggling puzzles and terrifying demons as you go deeper into the mines.

The old miners tell stories of other dangers, too. For example, they laid pipes which the demons have learned to use for their own heinous purposes. Items can be pushed into any pipe that is at a right angle to the gravitational force. The objects will slide through the pipe. Some pipes will actually change boulders into crystals (or vice versa).

You will have to learn about other hazards as you gain experience. For now, it's time to unseal the mines and let the robot in. The rest is up to you. Remember, the future of the community depends on you! 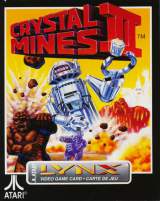