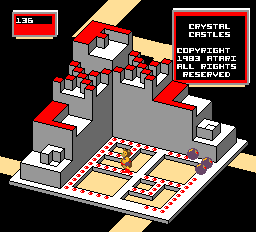 Crystal Castles is an inventive variation on the maze-driven collect-the-dots gameplay first seen in Namco's legendary "Pac-Man". The player takes on the role of 'Bentley Bear', who must run around a number of "castles" - each presented in the form of an isometric forced 3D maze - picking up the gemstones that litter its walkways and platforms, before moving onto the next castle.

Each level is populated by a variety of enemies, including sentient trees, gem eaters, a swarm of bees and Berthilda the Witch. Some enemy types move around the levels randomly, while others will actively chase Bentley. Gem Eaters will devour any gems they reach before the player.

In addition to four-directional walking, Bentley can also jump to avoid pursuing enemies and obstacles. Many levels have platforms that can only be reached via an elevator and some screens also contain hidden secret passages and ramps, as well as 'warps' that move players forward several levels.

Jumping over the trees will shrink and temporarily disable them, while wearing Berthilda's red hat grants the player temporary invincibility, allowing them to kill the witch should they manage to catch her. If Bentley Bear touches a Gem Eater while it's in the process of eating a gem, the Gem Eater dies and 500 points are awarded to the player. However, if the Gem Eater is not eating a gem when touched, Bentley Bear dies.

Some levels contain a large pot of honey. A swarm of bees appears near the honey approximately every five seconds but collecting the honey pot earns the player 1,000 bonus points and causes the bees to appear less frequently. Other enemies, such as the balls, skeletons and ghosts must be avoided.

If Bentley collects all of the gems on a castle, the player receives bonus points. A bonus is also awarded in the event of the player picking up the last gem on the level.

Crystal Castles consists of ten different stages broken down into 37 castle mazes (with four castles making up each stage, apart from 10th, which has only one castle). 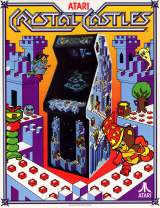