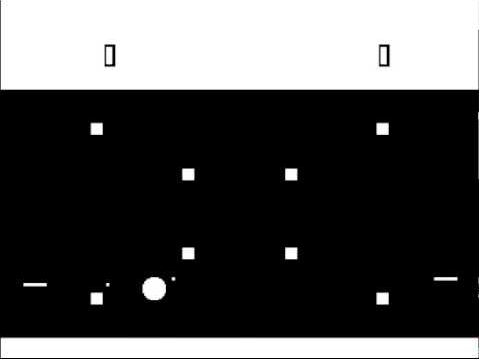 The game required two players, each with a gun, at opposite sides of the playfield. Each player had a vertical position knob (a potentiometer like Pong) and a fire button. Each gun could have one shot in the air at a time. There was a big ball, which started at the center, and there were small bumpers in the playfield that made the ball bounce. You tried to “push” the ball into your opponent’s goal line by shooting it. Each hit added a little energy and it took multiple hits to get the speed of the ball up, but then you had to watch out for rebounds off the bumpers.

An interesting aspect of the game was the one-shot-at-a-time rule. If the ball was on your side of the field, then you could shoot more often than your opponent (unless, of course, you missed and had to wait for the shell to cross the entire screen). This made it possible to achieve remarkable come-backs from near-certain defeat.