published 29 years ago by 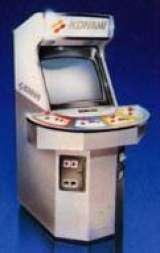 Crime Fighters 2 was released in July 1991 in Japan. It is known outside Japan as "Vendetta [Model GX081]".

On one of the boxes there is the word 'Kilroy' spray-painted on it, this is probably a reference to the quote, 'Kilroy was here'.