Crabs emerge from four differently colored columns along the bottom of the screen, and settle at the top. The objective is to avoid being in front of the crab, and to push the crabs from the bottom to prevent them from mounting on the screen. Points are earned by pushing and eliminating crabs. The game ends when the player has been bitten three times. Player movement is in all four directions (Up, Down, Left, Right). The A & B games had similar objectives, but with slightly different speeds. 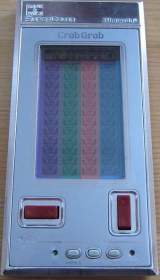 When Nintendo of America released the game, they made exclusive art for the box that wasn't present in the Japanese version. They also did this with Spitball Sparky and a couple other titles. Within the game was a grey lea?et that told the gamer how to play. A similar lea?et was included in Spitball Sparky, though it was yellow instead of grey.