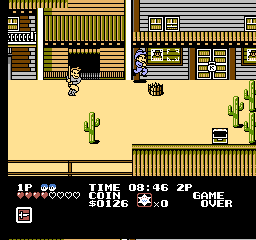 Sheriff Sam and Little Chief are coming to town in thie delightful western adventure. COBOY KID is a two player simultaneous action adventure for the entire family. COWBOY KID has 4 MEGS of action packed into this NES cartridge. Players must learn to be appointed sheriff so they can rid the West of the scourge of evil. Can you bring these dudes to justice? Billy Morgan * The Mad Brothers Coyote Jim * The Scorpion Master Wild Wolf Chief * Slash Joe * Keith COBOY KID rounds up arcade and adventure action for the wildest showdown in the West. Beware rustlers, There's a new sheriff in town!