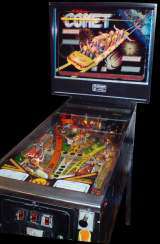 'Comet' was named after a popular ride at Chicago's now-closed Riverview Amusement Park.

It was the first solid-state machine to feature a one million point shot, using Steve Kordek's voice to announce 'One Million!'. An example of an electro-mechanical game with a million point shot is Williams' 1957 "Arrow Head".