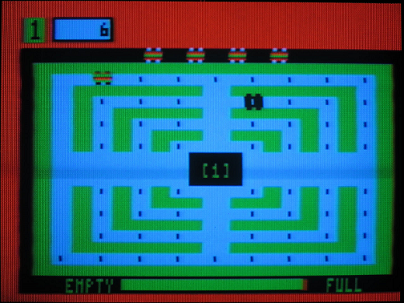 Fashioned after the coin-op, Head On.

The game accommodates from one to four players, chosen by knob #1 at the completion of the load. The gameboard is a rectangular maze of four lanes of dots with lane openings North, South, East, and West. The top of the screen keeps trade of player data. "Pit road" where the remaining cars are parked is just below the scoreboard. The infield displays the number of the current screen or level. At the very bottom is the all important fuel gauge. Each player is given five cars at the beginning of the game. A bonus car is awarded for earning 1000 points. Your car moves through the maze in a clockwise direction picking up dots for points by passing over them. A computer controlled car is on the track moving in a counter-clockwise direction.

The object is to clear the track of all the dots in order to go on to the next screen. You must avoid collision with the computer car by changing lanes. This is accomplished by steering with the joystick at the lane openings. When changing lanes, care must be taken not to collide with the walls. Your car may move one or two lanes at the openings depending on the length of time the joystick is held. The fuel supply is constantly being depleted as you drive. Increasing speed also increases fuel consumption. Each player's turn continues until a crash occurs with the computer car or a wall, or the fuel gauge reaches empty. Checkered flags appear occasionally on the track. Passing over one of these flags will add to both your fuel supply and your point total.

When a crash occurs at any location on the screen, your car spins wildly amid a burst of circular shock waves. A tow truck will come on to the track from the left side. The truck will go to the location of the wrecked cat, pick it And tow it off the left side of the screen. When a screen is completed, the tow truck will also make an appearance. Bonus points are awarded for completion of a screen. The bonus begins at 50 and increments by 25 points per level. The tow truck tows the bonus points across the screen.

An outstanding conversion of a mechanical arcade machine to a video game. In the game havens known for their delicious pizza across the country, resides a little machine that is always busy. It attracts gamers ranging from the very small to the very, most experienced players (of all ages). The game features a rather large, stuffed, leather hammer on a chain. There is a flat surface with a series of holes. After inserting a token, moles (yes, those little enemies of lawns and gardens everywhere) begin to randomly pop up from the holes in a taunting fashion.

The player, using the padded hammer, must attempt to bash as many of the critters as possible in the time allotted.

The board is a 3x3 grid with each square being a 'hole'. Moles appear randomly and briefly from these holes. The joystick is your "hammer." The grid represents every possible joystick position including neutral. When a mole pops out, position the 'hammer' accordingly and Wack (pull the trigger). When hit, the mole chirps, frowns, and disappears back down the hole to taunt again later. The game starts out rather slowly and increases in speed as you progress.