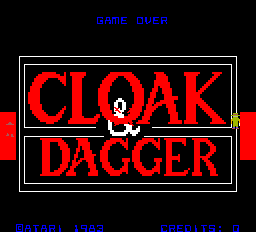 Agent X, complete with trenchcoat, Bogie hat, and briefcase, hurries through a series of adventures and misadventures to retrieve stolen plans and destroy dastardly Dr. Boom's subterranean bomb factory. Our masked hero descends to the depths of Dr. Boom's laboratory in a special elevator. On each floor he encounters a series of conveyor belts that are moving explosives. A giant bomb ticks down the game seconds while devices of Dr. Boom's plotting, such as bomb converters, forklifts deflecting shots back at Agent X, robot guards, acid pits, and crawling eyes shooting death rays, challenge the player(s).

CLOAK & DAGGER is a 1- or 2-player game with a color raster video display. You control Agent X as he descends underground floor by floor in an elevator to Dr. Boom's lab, located on the 33rd floor. Your main goal is to retrieve Top Secret plans that are surrounded by an electrical arc. To stop the electrical current, Agent X must shoot all the fiery nodes as he fights off robot guards.

As Agent X leaves the elevator on each floor, he must make his way carefully and quickly across the screen to another exit. Each floor displays a configuration of conveyor belts moving green unarmed and red armed explosives. Agent X can pick up the green explosives. The red explosives will explode on contact. Some floors have marauding robot guards, death-ray shooting crawling eyes, and acid pits.

At the center of the display, a double-coiled fuse to a giant bomb is ticking down the game seconds for each level. Agent X can light the fuse in a rush for bonus points, but must be able to escape that level before the bomb explodes. If the fuse has shortened on its own to one coil, it lights automatically and prompts Agent X to make a mad dash to the waiting elevator. The doors close just as a burst of light from the explosion is seen. The game's perspective now changes to a full view inside the elevator. Messages flash across the elevator to give helpful hints on the next level.

Dr. Boom has placed explosive mines on every 4th floor. On each of the preceding 3 floors Agent X can pick up a secret map box that will show him part of the safe path across the minefield on the next 4th floor.

Agent X's first goal is to travel successfully from one elevator to the other; his second goal is to pick up a secret box to get a map of the minefield on levels 4, 8, 12, 16, 20, 24, 28, and 32; the third goal is to light the bomb fuse and escape before the explosion.

As game play progresses, Agent X may find an extra-life box and a mystery box that give bonus points, double speed, half speed, and occasionally, an extra life. Extra bonus points are earned for picking up green unarmed explosives or for skipping floors.

If Agent X succeeds in capturing the top secret plans, he must fight his way back up to the top level. The appearance of box compressors, crawling eyes, and other enemies are more random on the way up than on the way down. If Agent X makes it back to the surface, a free game will be awarded (depending on the settings of the option switches).

The game ends when you use up your last life or successfully make it to the surface. 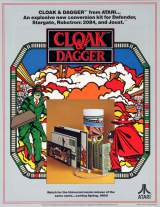