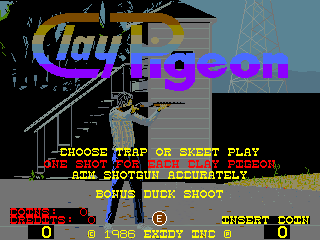 The object of Clay Pigeon was to shoot as many clay targets as you can, using an arcade light gun that was shaped like a shotgun. At the start of the game you are given the choice of selecting either Trap Shooting or Skeet Shooting. Trap shooting is where the clay target is thrown directly away from the shooter, while in skeet shooting the target is launched across the shooter's field of vision. The graphics are done in Exidy's realistic style, each round is played against a decent looking outdoor background, and an extremely repetitive announcer yells 'pull' to warn you of each and every target being launched. After several rounds of targets, you finally get to go after some real live animals! The real live animals are of course, ducks! The ducks are small and fly onto the screen in small groups of up to around a half dozen or so, and unlike the earlier title "Vs. Duck Hunt", you cannot miss any of these. Missing any ducks in this round ends the game instantly, and will more than likely have you fumbling for another quarter in an attempt to do it right this time.