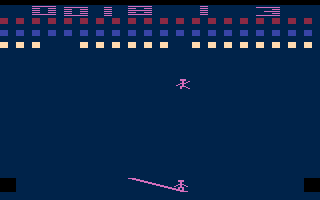 Each player receives five clowns or turns. If you fail to catch a clown on the teeter-totter he will crash and disappear from the playfield. Press the red controller button and another clown will bounce off the trampoline from the right or left corner of the playfield. After five clowns have crashed the game is over. The clowns may land on any point of the teeter-totter except where the other clown is sitting, which causes them to crash.

GAME VARIATIONS (GAMES 1 through 6 may be played by one or two players, but GAMES 7 and 8 are two-player games only.)

GAME 1 is called Breakout Circus. As the clown pops balloons he rebounds from balloon to balloon both horizontally and vertically. Each time a full row of balloons is popped a new row appears and you receive bonus points. When the top row of red balloons are all popped you receive and extra clown.

GAME 2 is like GAME 1, except the playfield has an additional wall of barriers added below the balloons, which makes the game more difficult.

GAME 4 is Breakthru Circus with a row of barriers added to the playfield below the balloons.

GAME 5 is similar to Breakout Circus, except the balloons do not "restore" after the full row is popped. All balloons on the screen must be popped before you receive three new rows of balloons. At this time you receive 170 bonus points and an extra clown.

GAME 6 is the same as GAME 5, but with the additional row of barriers added below the balloons.

GAME 7 is for two players. Both players share the same wall of balloons. The computer tracks each players' score individually.

GAME 8 is the same as GAME 7 but has the addition of barriers below the balloons to make the game more challenging.