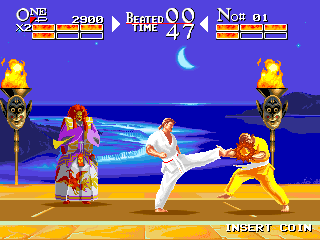 Karate Tournament is a one-on-one fighting game for one or two players, based on the ancient and most well known of martial arts, Karate.

Players enter a karate tournament - having first selected their preferred skill level, from either White, Brown or Black belt - and fight against a number of progressively tougher opponents. Each victory awards the player with a higher belt grade within their current belt colour - white grade six to white grade five, for example - and if the player wins the tournament, he or she is awarded a higher belt colour and the game ends. If players chooses to play the game on the 'Black Belt' skill level, defeating opponents is awarded with a higher grade, or 'dan' of Black Belt.

Karate Tournament uses a distinctive graphical technique in that it 'morphs' some of the combatants' movement graphics to simulate speed and motion blur. The game was also unique upon its release in that, in a world of "Street Fighters" and "Mortal Kombats" - replete with fantastical special moves - Karate Tournament was a genuine simulation of a recognized martial art; something not really seen since the first appearance of Data East's legendary genre-defining fighter, "Karate Champ", released eight years' earlier in 1984.