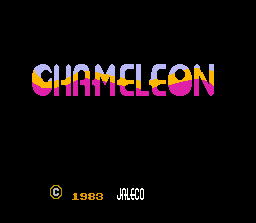 A colourful platform game in which the player controls a long-tongued chameleon that must make around a series of single-screen, platform-strewn levels; stealing chicken eggs from their nests and being careful to avoid contact with angry chickens.

As well as walking along the platforms and poles, the chameleon can use its tongue to pull itself up to higher platforms; and to escape from any nearby chickens. Each level also has a number of bombs placed at various points; the chameleon can hit these with its tongue to send them crashing towards nearby chickens. The player must keep an eye out for projectiles thrown by the chickens, such as flashing eggs.

If the nesting eggs are left for too long, they will hatch into a baby chick. The player can eat the chick for bonus points, but if the chick is left alone for too long, it will grow into an adult chicken and start attacking the player.

A level is over once all of the eggs have been collected and all of the chickens killed.

Developed by Donga-Seiko (After the development of this game, some of the staff established 'Tose').

After publishing this video game, Japan Leisure changed their name to 'Jaleco'.