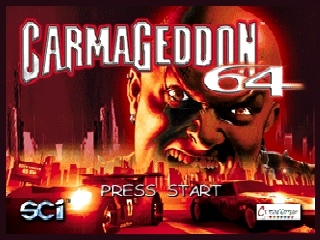 After Carmageddon PC publisher Interplay came down with an unexpected case of the willies, French publisher Titus snapped up rights to bring out the N64 version. After being in development longer than The Phantom Menace, Carmageddon finally hits the N64.

In many ways your basic checkpoint-to-checkpoint arcade racer, Carmageddon PC raised hackles worldwide with the gratuitous featurette of having drivers run down pedestrians. For Carmageddon 64, developer Software Creations dialed back a tad on the mayhem. Now, the objects of your acceleration are swarms of lumbering zombies. Makes sense, too: What live human in his/her right mind wouldn't head for the hills at the sight of 4,000 pounds of thundering chrome?

The wordy intro recounts how, in 2026, freakishly high solar activity zombified the vast majority of humanity. Condemned to a world without cable TV, the sentient survirors while away the postapocalyptic tedium by mowing down the undead hordes and, whenever they get a chance, T-boning rival drivers. The authorities look benignly upon such fun and games, even rewarding particularly impressive harvests with one-way tickets to off-world colonies.

Despite the pop-eyed premise (which borrows heavily from '70s B-movie classics Death Race 2000 and Mad Max), Carmageddon plays far differently from your typical nail-the-A-Button racer. To squish as many zombies as possible, you'll find yourself backing up more often than a rookie outfielder trying to catch Mark McGwire's yard jobs.

The Pak boasts 10 characters rampaging through 37 levels in more than a score of vehicles. Power-ups include the Replusificator and Helium-Filled Zombies.

Extremely sharp corners, narrow tunnels and cliff-face roads without guardrails all put a premium on handling. Compounding your problems are the TNT canisters that litter the tracks. Even though the controls are extremely tight, the brake button plays a bigger part here than in just about any racer we've seen since NASCAR 2000.

Carmageddon offers three versus modes. In Eliminator, you compete to harvest a zombie quota. Obliterating your rival is the objective of Driven to Destruction, while the winner of Checkpoint Stampede is the first to clear all a course's checkpoints in any order. The 10 multiplayer arenas include a junkyard, a quarry, an amusement park and a snowy mountain.

One of the most controversial games of its time, Carmageddon is beginning to shows its age, most notably in the murky palette. The lack of an on-screen map makes it too easy to get lost, while figuring out how to use the power-ups is just too darn complicated. On the plus side, first-rate steering controls and the sensational premise should rope in a flock of mature gamers.