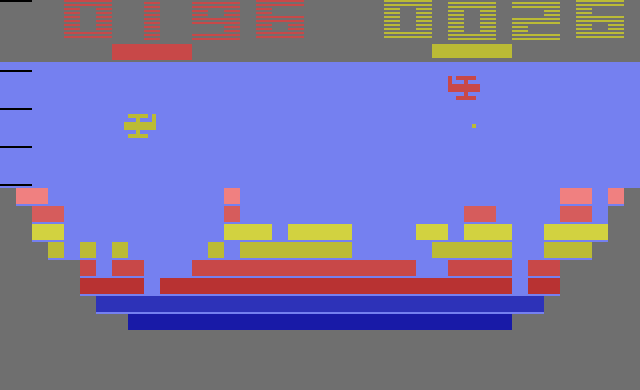 GAME 1
Canyon Bomber (One-Player)
Test your skill against the computer. It's not an easy task. You've got six misses in which to match wits with the computer for a higher score. Each time the bricks in the canyon are hit, the remaining bricks fall to a lower level (rather than remaining stationary in their original position). Bricks that fall to a lower level are worth the points designated for that level. Keep an eye on the solid bar beneath your score on the upper right side of the screen. It is a "miss indicator" and gradually decreases in length each time you miss until six misses are recorded and the game ends. The bar is also color-coordinated with your planes and your score. Set your sights for 1,000 points. Although the game will not end if you reach the 1,000 point mark, it's an excellent goal to set for yourself since it will be very difficult to obtain.

GAME 2
Canyon Bomber (Two-Player)
This game differs from Game 1 only in that you are competing against another player rather than the computer. Play ends when six misses are recorded against both players. The player with the highest score wins. Don't forget to keep an eye on your opponent's "miss indicator" as well as your own. Bombs away!

GAME 3
Canyon Bomber (One-Player)
This one's the same as Game 1 with one exception. Rather than falling to a lower level, the bricks in the canyon stay suspended in their original position when the surrounding bricks are hit.

GAME 4
Canyon Bomber (Two-Player)
You compete with another player the same as in Game 2. This time, however, the brick remain suspended instead of falling to a lower level.

GAME 5
Canyon Bomber (Two-Player)
Get set for a test of your endurance and concentration. The first player to score 1,000 points wins. No time limit and no limit to the number of bombs or misses. Falling, rather than suspended bricks are programed into this game. No "miss indicator" will appear on the screen in games with unlimited bombs.

GAME 6
Canyon Bomber (Two-Player)
This game program is identical to Game 5, except that the bricks stay suspended.

GAME 7
Sea Bomber (One-Player)
You're playing against the computer. Set the level, release the bomb, and boom, you're ready for action. Sounds easy, but the computer's a real steady competitor. If you score 1,000 points before the computer does, you're a winner!

GAME 8
Sea Bomber (Two-Player)
This time you're competing against another player in a race to the 1,000 point mark.