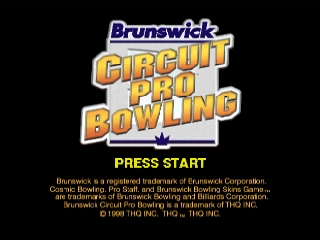 THQ, the publisher of BASSMASTERS 2000, has corralled a plum license from Brunswick Corp., the world's leading maker of ten-pin gear.

Brunswick Bowl offers six modes: Exhibition, Skins Game, Tournament, Career, Practice and Cosmic Bowl. In Skins Game, you face three other human- or CPU-controlled bowlers, with a pot of money going to the high scorer in each frame. When there is a tie, the money rolls over to the next frame.

The nine tournaments follow official Brunswick rules. In Career Mode, you play through the tournaments. Cosmic Bowl is just like Exhibition, except that it takes place in a particularly garish Las Vegas alley. In all, there are 14 alleys from around the world, but bland background graphics and generic music put the damper on any genuine international flavor.

The virtual pros bowl with their signature styles. If you want to be your own man, though (there aren't any women in this game), you can create your own bowler with the modest Create Bowler feature. There are three difficulty levels.

In terms of play mechanics, Brunswick Bowling is much like golf games. After positioning yourself and setting your left- or right-hook, you press the A Button to launch a Power Meter, then press A again to mark how much power you want and launch an Accuracy Meter. You press A again to mark your accuracy. Ball and pin physics feel realistic.

However, while golf games offer many choices in clubs, Brunswick Bowling only offers a choice of four bowling balls per player. And while golfers must cope with constantly changing terrain and weather conditions, Brunswick Bowling only makes you adapt to oil patterns that vary from lane to lane. The result is very simple gameplay that makes for casual multiplayer fun, but limited solo appeal.