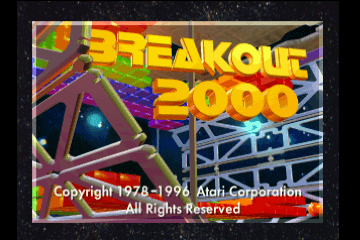 Breakout 2000 was a 3-D version of the arcade classic. Designed for one or two players. The object of the game remained the same but in a 3-D playfield. There were a total of ten different phases to survive, each consisting of five playfields. Each playfield was more difficult to clear than prior one, and each Phase added even more difficulty and features.