Brave Battle Saga - The Legend of the Magic Warrior

Brave Battle Saga was a turned based RPG developed by the Taiwanese company Chuanpu in 1996. The game has been translated to English 100% and now is playable in an official release.

The Story of the game follows a civilization where humans and demons co-exist in harmony. They use technology and magic respectively. Technology is known to be the triumphant over magic; however, the world as they know it is destroyed by a massive technological accident. The survivors of this society continue to live without any technology access for thousands of years; until old technology is resurfaced and is returned to put in use. Due to this event, Demons have made return. 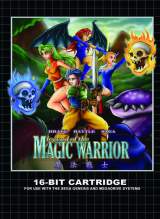