The game is seen from a 2D perspective, and your character is always on the right. 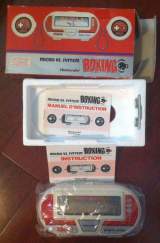