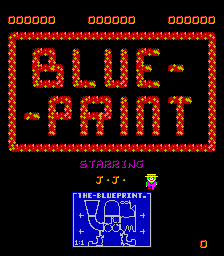 Blue Print was released in September 1982.

Ashby Computers and Graphics Ltd, the game's programming team, would go on to become 'Ultimate Play the Game', who created a large number of classic and seminal games for both eight-bit home computers, such as the ZX Spectrum and Commodore C64; and, eventually, 'Rare'.

Under the ownership of Nintendo, the Rare team would be responsible for some of the finest games to grace both the SNES and N64 game consoles; as well as creating a small number of arcade titles, such as "Killer Instinct" and "Battletoads"; both of which were released in 1994. Rare is now owned by Microsoft.

* Use your speedup ability to negotiate the maze faster, but save some of your energy in case you collect a bomb. You do not have enough time to dispose of a bomb running at normal speed.

* There is never more than one piece of the blueprint in a house, so do not return if you have already collected a weapon piece. There will only be a bomb located there.

* The firing pattern of the weapon is random, and only a few shots will actually reach the top of the screen. It will therefore be mainly luck when you kill the monster.