Nintendo 64 cart. published 25 years ago by Nintendo of America, Inc. 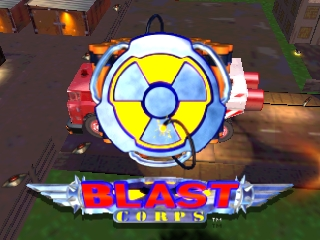 The game geniuses at Rare Ltd. who brought you GoldenEye 007 and Diddy Kong Racing made a gutsy move with their very first N64 game. Blast Corps deftly combines explosive action with elaborate puzzles and some of the most innovative play control to appear on any system. The variety of missions, the plethora of vehicles and the relentless search for hidden secrets all add plenty of depth to this one-of-a-kind pak.

Blast Corp's story could have come from a made-for-TV disaster movie. A runaway carrier loaded with nuclear nitroglycerine is on an auto-piloted course through some of the most densely populated parts of the world. The slightest jolt will set off a thermonuclear explosion. It's up to the elite combat construction team, the Blast Corps, to use its arsenal of heavy machinery to clear a path for the deadly payload. It's a race against time as the carrier plows relentlessly through the wasteland you've just created out of steel, brick and concrete buildings.

You'll know when you've slipped up: a great, billowing explosion will light up the sky! Despite the focus on mass destruction, there are plenty of times you must use your vehicle for tasks other than knocking stuff down. Blast Corps is packed with tons of hidden secrets, some of which are very difficult to find. Finding the secrets will open off-beat bonus levels in which you can do all kinds of strange things, such as demolishing giant pool cues on a huge billiard table in space. Some of the bonus levels will also challenge your handling of the vehicles on a variety of twisted courses.

And what game would be complete without the ever popular test of clearing the missions in as short a time as possible? Do so and you'll win a platinum medal. In Blast Corps, your goal is to win a Platinum medal in every mission, a challenge that should keep even the best game players busy leveling buildings for a long, long time. (The platinum times in the U.S. version are insanely difficult!). Blast Corps can save a single player's progress on the game pak, or it can save multiple games on a Controller Pak.

Blast Corp's 3D graphics are stunning. The explosions are big and colorful and the handsome vehicles take great advantage of the N64's built-in effects such as environment mapping for reflections. The designers wisely opted for a clean, simple design for the background graphics and avoided the use of fog like the plague. As a result, it's easy to stay focused on the task at hand as the seconds tick down. You can adjust your view by rotating it around your vehicle, and there are a few degrees of zoom.

Each of the vehicles has a completely different control scheme. This can make it difficult to master any one vehicle, although there are several training levels in which you'll be able to put each machine through its paces before you take it out into the real world. Even with a lot of practice, though, the handling of some vehicles still seems a little touchy. You'll have to know just when to let some vehicles -- notably the colossal Backlash dump truck -- slide out of control. This can be frustrating when the nuclear carrier is bearing down on you like there's no tomorrow. Of course, the play control also adds to the challenge, and in the hands of a master, a difficult-to-control vehicle like the Backlash can be one of the best in the game.

Blast Corps's strongest point is the variety of levels and number of vehicles in the game. Counting bonus missions, there are more than 50 unique levels in all. The challenge of getting platinum medals in every course will keep the average game player busy for well over a hundred hours. Along with the many levels, there are eight different wrecking vehicles, four different cars (for zipping quickly across the landscape) and a train, barge and crane to play with. Even if you don't count the relatively short bonus levels, Blast Corps easily has more levels than any game yet released for the Nintendo 64!

Overall, Blast Corps offers something for both novice and expert players. Although some of the vehicles are a bit tough to control, even a beginner can have fun playing around with them. Advanced players will love the variety and challenge of the game. Some of the later missions are extremely tense, with little room for a misstep. Best of all, the game is about knocking down buildings, which turns out to be, well, a blast!