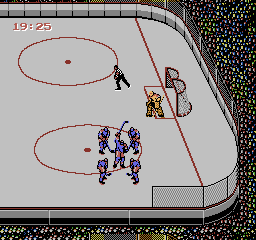 Fight for victory in the hottest hockey game on ice.

With sharpened blades and a lethal stick, you slash into a rink surrounded by thousands of screaming fans. It's time for full-speed, high contact hockey, the kind of bone-jarring action played by the pros.

The puck is dropped, you take control, center it and... Whoa! Your opponent viciously checks you from behind, making an incredible steal.

You charge after him, crushing him against the boards. Suddenly tempers flare, off come the gloves, and you're swinging fists like a prize fighter.

What action! You can even rack up assists like the great you-know-who. Or play goalie in the slap shooting penalty scenes.

So strap on Blades of Steel. And imagine those immortal words - "He shoots, he scores!"

Released in December 1988 in the USA.